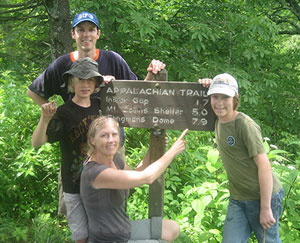 Recently, I had the opportunity to hike my first leg of the Appalachian Trail – from Clingmans Dome to Newfound Gap in the Great Smoky Mountains National Park – approximately 8 miles. It was raining. We finished wet and muddy, but exhilarated.

What does this have to do with kayaking? Well, it got me thinking about the amazing foresight of volunteers and government leaders to develop 2,178 miles of footpaths stretching from Maine to Georgia, solely for the purpose of hiking and enjoying the great outdoors. And I wondered, if decades or centuries from now, folks would ponder the foresight of thousands of paddlers who are tirelessly working to establish extensive marine trails along some of the world’s most amazing coastlines and waterways.

If you’re looking for a new kayaking destination, here’s a great place to start your search (trail list updated 1/22/11):

One of the most recent additions to the world's established marine trails, this is the nation's longest one-state river trail... 631 miles to appeal to every type of paddler from the turbulent stretch of the Coosa between Jordan Dam and Wetumpka, known as Moccasin Gap, to the vast Mobile-Tensaw Delta to the tidewaters of Mobile Bay. Kayakers are even invited to use the locks through the US Army Corps of Engineers dams on the Alabama River.

The coastline of British Columbia is a paddler’s paradise. There are few places in the world in less than an hour’s distance from a metropolitan area, where a paddler can be exploring in and around islets populated only by wildlife, and enjoying spectacular views of the ocean and distant mountains.

Travel a bit further from the main cities and the rewards of kayaking in British Columbia grow exponentially. Along with magnificent and beautiful vistas come more frequent sightings of an incredible variety of wildlife and marine plantlife. This is adventuring at its best, in a sometimes very wild and remote wilderness of wind, wave, and shoreline.

Kayakers and canoeists, in partnership with the Government of British Columbia, are working together to build the longest and most extensive trails system in British Columbia: the BC Marine Trails Network. It will become the largest water trail network in the world, covering nearly all of the 14,000 miles of BC coastline.

In the U.S., Washington State continues to develop a series of marine trails both along the Pacific Coast and inland along the many lakes and rivers. From the first effort, Cascadia Marine Trail, to the lastest work on the Northwest Discovery Water Trail, Washington State paddlers are continuing to make sure their waterways are protected for future generations of kayakers, canoeists and other non-motorized boaters.

Washington State’s Cascadia Marine Trail is one of the premier water trails for non-motorized boaters in the United States. Since 1993 thousands of state residents and visitors have traveled on the water trail that extends the length and width of Puget Sound from the state capitol in Olympia to the Canadian border.

This inland sea trail is a National Recreation Trail and designated one of only 16 National Millennium Trails by the White House. Suitable for day or multi-day trips, the Cascadia Marine Trail has over 50 campsites to visit. People can boat to the campsites from many public and private launch sites or shoreline trailheads.